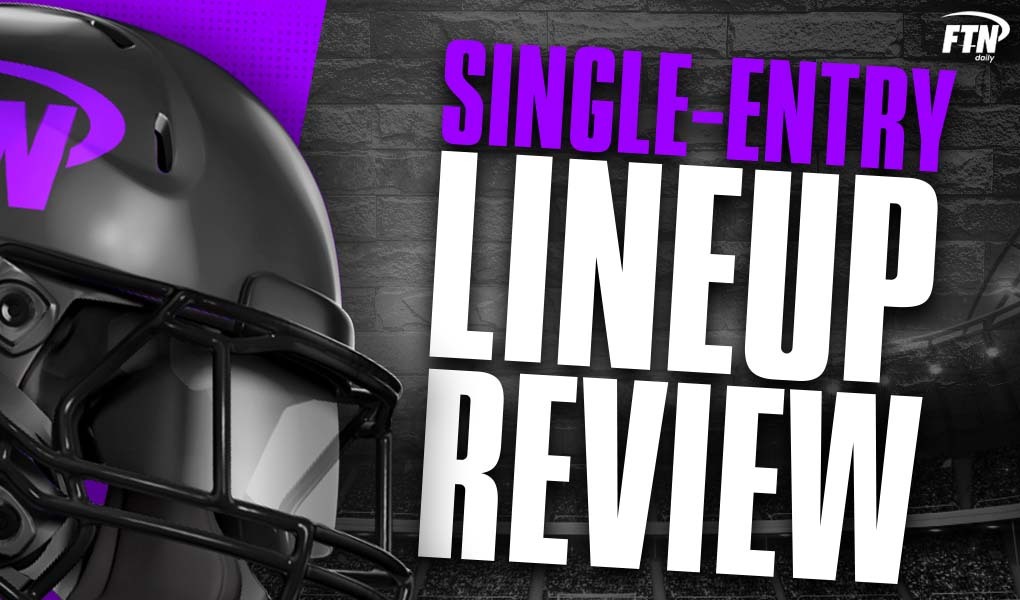 FTN's Alex Blickle looks back on his single-entry DFS lineups from Week 5 to see what went right, what went wrong, and what lessons can be applied going forward.

Each week throughout the NFL season, I’ll review my single-entry DFS lineup, as well as a couple others. I will also track success rates throughout the season. The criteria for the other lineups to make the article (and tracking) will be over 10% of my overall investment. This week, that includes:

The goal here is to hold myself accountable for the decisions I make while also helping to provide a blueprint for long-term success in GPPs.

Throughout the year, I’ll emphasize the top 10% and top 1% hit rates. While profit/loss is at the mercy of significant variance at the top of tournaments, these hit rates stabilize much faster and can therefore paint a stronger picture of our performance.

Despite my best lineup of the season, it fell short again this week with all of the chalk hitting in a big way. Let’s dive right in:

I was fully expecting DeVante Parker to play (and wanted to use him instead of Jaylen Waddle), so that news threw me off in the morning. I wound up pivoting from DeVante Parker/Keenan Allen/Cowboys to Jaylen Waddle/Justin Jefferson/Eagles.

Every choice we make can be categorized in one of four groups:

I loved this game because of the pace and pass rates of each team. Miami finished with 42 dropbacks and Tampa had 46. Uhhh, that’ll do. Jacoby Brissett’s production was more than enough, but it needed to go through Waddle and Mike Gesicki for the stack as a whole to pay off. They combined for 13 targets, but only caught six balls, none for scores. As I wrote in chat, the other thing I loved about this stack was what it allowed me to fit: A whopping four studs, in Mike Evans, Ezekiel Elliott, A.J. Brown and Justin Jefferson.

It’s really a shame Parker was ruled out; I think he could have greatly improved the passing efficiency in the second half. To be completely honest, I may have tried to pivot to the Tampa side of things had I not been on a golf course in the middle of a tournament, but so goes the life of a professional golfer in love with DFS. A 2v2 I could have swapped: Tom Brady and Antonio Brown for Jacoby Brissett and Parker. When looking at this way, it’s pretty clear that even without the benefit of hindsight being 20/20, the Tampa pairing would have been better. Perhaps the lesson here is that paying up at QB is always worth it?

This was the killer for my lineup. Not only did A.J. Brown do next to nothing, but his lack of production left a void that Derrick Henry filled all game long. Even if you just take ten of Henry’s points and give them to Brown, I cash easily and have a chance at a top 10% finish as the field’s scores would have been dragged down.

Brown came into this game averaging nearly double the number of TDs (0.9 per game vs. 0.5) in wins of 3-plus points, so the expected gamescript was no reason to shy away.

I was super excited to see Eliot Crist highlight the soon-to-be-live projected line yards tool I have in the works. Well, it highlighted Dallas as having an insanely good rushing matchup. Zeke came through, with over 100 yards and two scores. The correlated leverage aspect also came through, as Amari Cooper and CeeDee Lamb came up well shy of ceiling performances despite each finding the end zone. Remember how I said the A.J. Brown disappointment was the killer for me? Well, think of what a home-run play this would have been if Zeke outscored Henry in addition to holding down one of the chalkiest passing stacks of the slate...

Why does the industry hate Mike Evans? This was one of those rare instances where a far more contrarian play (Evans vs. Godwin) was also the better play if you recall the WOPR splits I pointed to in my stacks & correlated leverage article.

Justin Jefferson was over 100 yards before the defense could even blink, but was unfortunately pretty much blanked afterwards. Jefferson was another guy Eliot hand-picked for his Top 10 Under 10% article — a staple in my weekly process.

I will lose every single time the chalk hits at the rate it hit this weekend. I just will. And that’s perfectly OK. I loved the lineup and was happy to see some key plays come through. More lineups of this quality are sure to bring success.