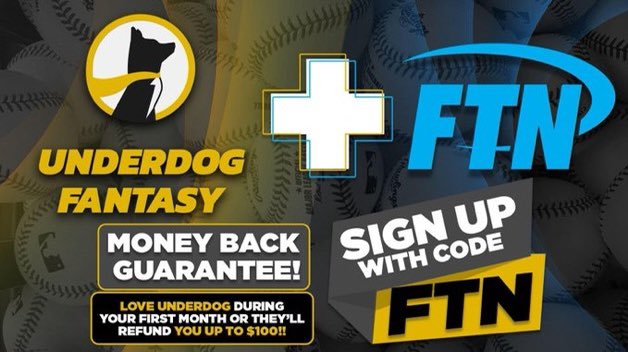 As the NFL offseason is picking up steam and the NFL Draft is quickly approaching, right now is time to capitalize on the early value stacks in best ball. The best way to do so is to get in on the action at Underdog Fantasy (promo code “FTN”) today! This beautiful platform offers a fantastic and user-friendly experience with multiple tournament formats to choose from. Let’s dive into some stacks that can yield high ceilings this upcoming season without breaking the bank.

*ADPs referenced below are per Underdog Fantasy.

(It's not too late to sign up for Underdog Fantasy for the 2021 MLB season. Promo code “FTN”)

Trevor Lawrence is landing in a prime spot to cultivate fantasy fuego. Under new Jacksonville coordinator Darrell Bevell, Matthew Stafford enjoyed a renaissance of productivity and deep passing when healthy. In 2019, Stafford was the QB4 in fantasy points per game (21.4). The main factor for this was Bevell's proclivity to dial-up deep throws. After a quiet start to last season, once free from the shackles of Matt Patricia, Bevell resumed designing throws down the field. In Weeks 13-17, Stafford ranked second in deep attempts (28) behind only Josh Allen. This will be key for Lawrence's ceiling in 2021. In 2019 before losing Tee Higgins to the NFL and Justyn Ross to injury, Lawrence was tied for eighth in deep passing touchdowns (13). With the cast of skill players surrounding Jacksonville's new franchise passer, this season holds immense potential for Lawrence.

Bevell will have D.J. Chark and Marvin Jones operate as his downfield tacticians with Laviska Shenault likely out of the slot. Chark has flashed immense upside when he's had competent quarterback play under center. Last year, we were doomed to watch every Jaguars quarterback sail passes over his head, but as recently as 2019, Chark was the WR20 in fantasy points per game (15.1). Adding Marvin Jones was a masterstroke by Jacksonville. Jones knows Bevell's system inside and out, and from the looks of drafts so far, he's criminally underrated, yet again. In 2019-2020, Jones was the WR21 and WR26 (PPR) in fantasy points per game, so staring at his WR53 overall draft position is egregious.

Shenault is the ceiling stack must with Lawrence. It’s within the range of outcomes that he is the most productive receiver from this group. As noted in the above tweet, Shenault was dominant in the slot last season. His combination of size and athleticism will be too much for opposing slot corners to handle. Add on top of this any rushing usage that Urban Meyer might have up his sleeve for Shenault (ala Curtis Samuel’s collegiate role). This stack has tournament-winning upside in 2021.

Jalen Hurts is being drafted inside the top-10 quarterbacks, yes, but before you shake your head and scream “NOT A VALUE” look at his overall draft position. Hurts is being drafted in the seventh round on average. At that spot in best ball drafts, the upside is worth chasing. During his abbreviated three-game stretch as a starter inside of a broken offense, he was the QB3 in fantasy points per game (25.8). Much of this was due to his rushing ability, as he averaged 79.3 yards on the ground per game. Hurts struggles as a passer are notable, but as a rookie in a weird offseason, this is something to also take with a grain of salt. In college, Hurts displayed enough pure arm talent to forgive his rookie season struggles tossing the rock. Hurts has QB1 overall upside this season if everything gels.

If Hurts is going to take that next step in his evolution, he will bring some pass catchers with him. Jalen Reagor is still an extremely talented player. His rookie season was derailed by a labral tear, UCL tear and concussion in Week 17. Reagor flashed enough as a playmaker in his brief first season to believe in the skillset. His WR51 price tag on Underdog is also palatable enough to warrant taking shots on a receiver that garnered first-round draft capital last year.

Dallas Goedert showed last season that he can be an integral part of this passing game. During Hurts' three full starts, he saw a 17% target share that ranked behind only Reagor. Last season, Goedert ranked ninth in yards per route run (1.75) among tight ends. He finished as the TE10 in fantasy points per game (10.6, PPR) last year. If the team does decide to deal Zach Ertz in a trade, Goedert's upside is top 3-5 at his position in fantasy.

Jameis Winston and Taysom Hill are being forgotten about in drafts. This Saints offense is still directed by one of the NFL’s best offensive minds in Sean Payton. New Orleans was quietly a top-five scoring offense (29.1 points per game) last season. As much as I would love to deny it, the dried husk of Drew Brees could not complete a pass last season longer than 12 yards to save his life. Winston and Hill’s lively arms could raise this offense even higher in 2021. Winston has displayed questionable decision-making, but undeniable talent as a passer in his career.

Hill, during his brief time as a starting quarterback last season, was the QB6 in fantasy points per game (21.5). While his rushing ability is well known, Hill doesn’t get enough credit for what he was able to do as a passer. In that four-game stretch, he ranked top 10 in on-target throw percentage, deep passer rating and clean pocket adjusted completion percentage. These two quarterbacks can be sandwiched together late in best-ball drafts. Avoid the headache of attempting to read Sean Payton’s mind. Draft both and enjoy top-10 production at the position for your best ball squad.

As I discussed in my early players to target in Underdog best ball drafts, Michael Thomas is a screaming value. Because of salary cap trimming, New Orleans has pared down the pass-catching options in this offense. This creates a target share and touchdown vacuum that must be filled. The question for Tre'Quan Smith has never been talent but opportunity. Over the last two years, he’s logged passer ratings of 122.8 (13th among wide receivers) and 124.8 when targeted. That opportunity could be his to seize in 2021. Adam Trautman is free square access to a top-five scoring offense in the NFL. Trautman will be competing with Nick Vannett, Garrett Griffin, and Ethan Wolfe for routes and red zone targets this season. He could assume an every-down role as a key cog in one of the NFL’s best offenses.

Derek has written for Fantasy Data, 4for4, Player Profiler, and as a co-author of the best selling Fantasy Football Black Book Series. His DFS, redraft, and dynasty takes have been projected to the masses with recurring guest roles on Sirius XM and DK Sweat. Born in Louisiana, he is a diehard Saints fan (Whodat). Derek now resides in Fort Worth, Texas, with his beautiful, football-loving wife and three kids.