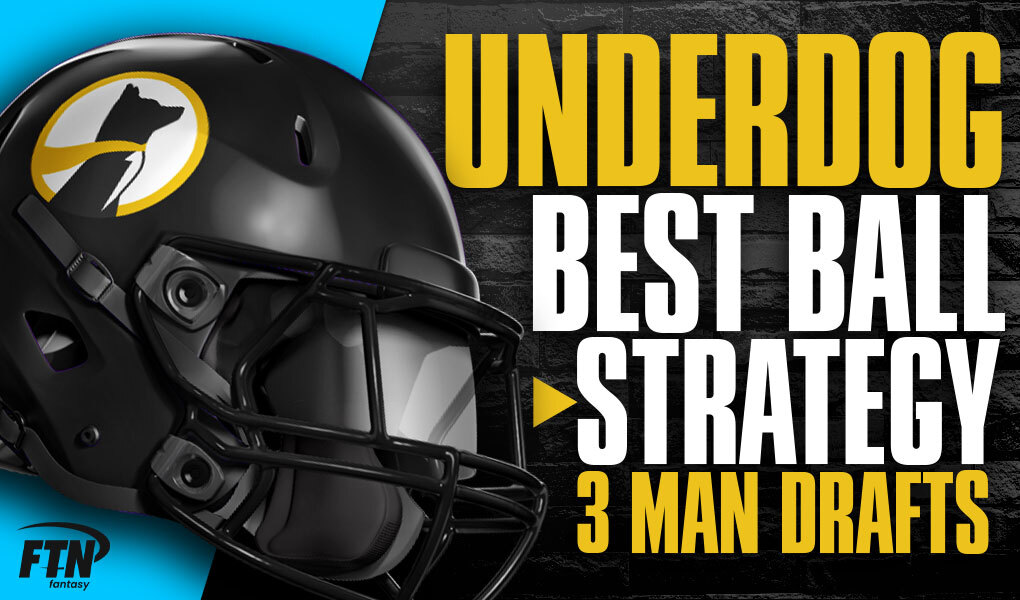 If you are looking for fast drafts where your team is full of superstars, look no further than Underdog’s three-man drafts. That's right, there are only three teams and the winner takes all. Three-man drafts create a unique opportunity to take advantage of position scarcity and create positive expected value outcomes with your team. At the end of the draft, everyone looks at their team and feels good, how could you not with only three people drafting, but there are ways to take advantage of your opponents and take down a bunch of these drafts.

While three-man drafts require a unique strategy they also require unique rankings. That is why I am debuting my three-man Underdog draft rankings to go along with my strategy piece. 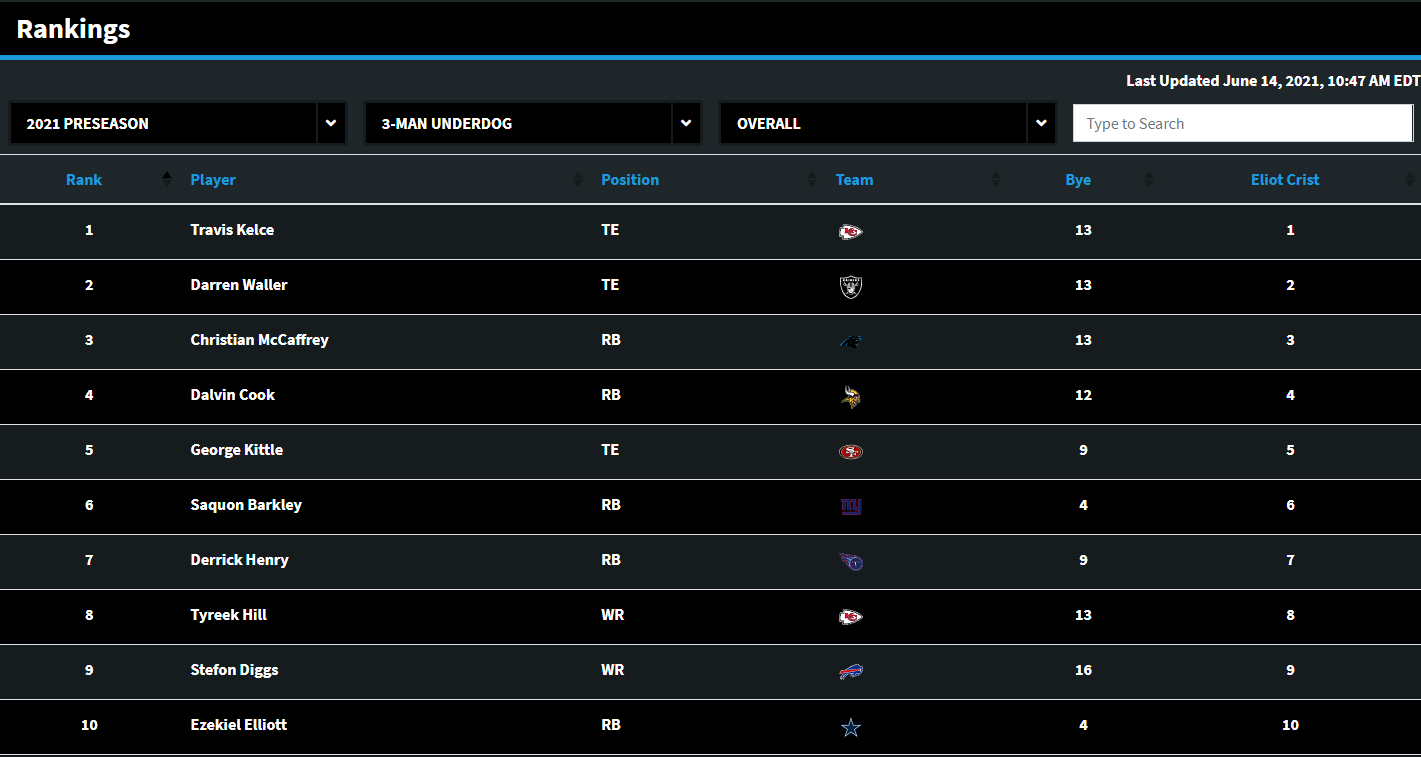 Pay attention to your opponents

One of the easiest ways to get ahead in three-man drafts that most people fail to do is paying attention to who they have drafted. You are going to want to sneak players past your opponents and knowing if he has already drafted quarterbacks or ignored the position can help you make those tricky one vs. one decisions. Knowing what position they are most likely to go to next can help you make sure you get your guys in good spots and aren't taking players too early.

While I am on board with waiting for quarterbacks in most draft formats, when you only have three people in a draft, you are looking to create as many advantages as you can. There are five Tier-1 quarterbacks for me in Patrick Mahomes, Kyler Murray, Josh Allen, Lamar Jackson and Dak Prescott. Those five will consistently put up QB1 numbers throughout the course of the season, as they have a perfect mixture of rushing floor and passing ceiling. Being able to land two of them allows you to only have to draft two and save an important roster position for one of the skill players. If you miss out, you likely have to counter with three quarterbacks just to have the same weekly upside as your opponents. If you pick at the turn, I like to try and capture two of these guys in back-to-back picks, so I don’t have to risk it. Most drafts turn into a game of chicken for the first person to take a quarterback with a run happening right after, so don't be afraid to pull the trigger on Mahomes and secure QB1.

Know your tiers! After Kelce and Waller, my top targets are the stud backs, as I'm looking to grab at least three guys in the top nine. Running back health is always an issue, but loading up on those guys creates such a high weekly floor.

After Tier 1, I am willing to be more patient while I target two of three players to fill out my running back position. Najee Harris, Antonio Gibson and Clyde Edwards-Helaire are three of the backs I am highest on who I am targeting in the mid-rounds. If I miss out on them, I will wait untill the end of the draft for the Chris Carson, Miles Sanders tier, and I'll likely want six total backs in that case.

Depth. We live in the day and age of the NFL finally realizing that it should be throwing the football. While I am so proud that NFL teams have learned basic math, it has translated to flatter receiver scoring. Last year, 36 receivers scored 152 0.5 PPR points or more compared to just two tight ends. 40 receivers averaged double-digit points per game compared to just four tight ends.

Where am I going with this?

Prioritize Kelce, Waller, and Kittle before you look to the receiver position. While in standard drafts I am looking at seven and eight receiver builds, in three-man drafts if I can construct my team I want, I am happy with as many as nine with a 2-5-9-2 build being ideal, where I get two of Kelce, Waller and Kittle. While my opponents attack receiver early, I am comfortable with depths and stacks allowing me to win the day. The Allen Robinson, Terry McLaurin, Julio Jones tier is so much more attractive than the Mark Andrew, T.J. Hockenson tier.

Even without a quarterback, stacking an offense is a very viable strategy. The Titans with A.J. Brown and Julio Jones, the Cowboys with Lamb and Cooper, the Bengals with Chase and Higgins, and the Bucs with Evans and Godwin are all attractive stacks, as there will be very few weeks one of those two players doesn’t put up WR1 numbers for the week.

Travis Kelce should be the first player drafted in every single three-man draft, but so often he isn't. If you are unable to get Kelce, get Darren Waller. Most drafts start with McCaffrey going first overall, so you should be able to get one of them. Last year, Kelce scored 260 0.5 PPR points, which would have ranked as WR4, and  Waller was the only other TE to score over 151 0.5 PPR points, finishing with 225.1, which would have ranked eighth among all receivers, and he is due for some positive touchdown regression. 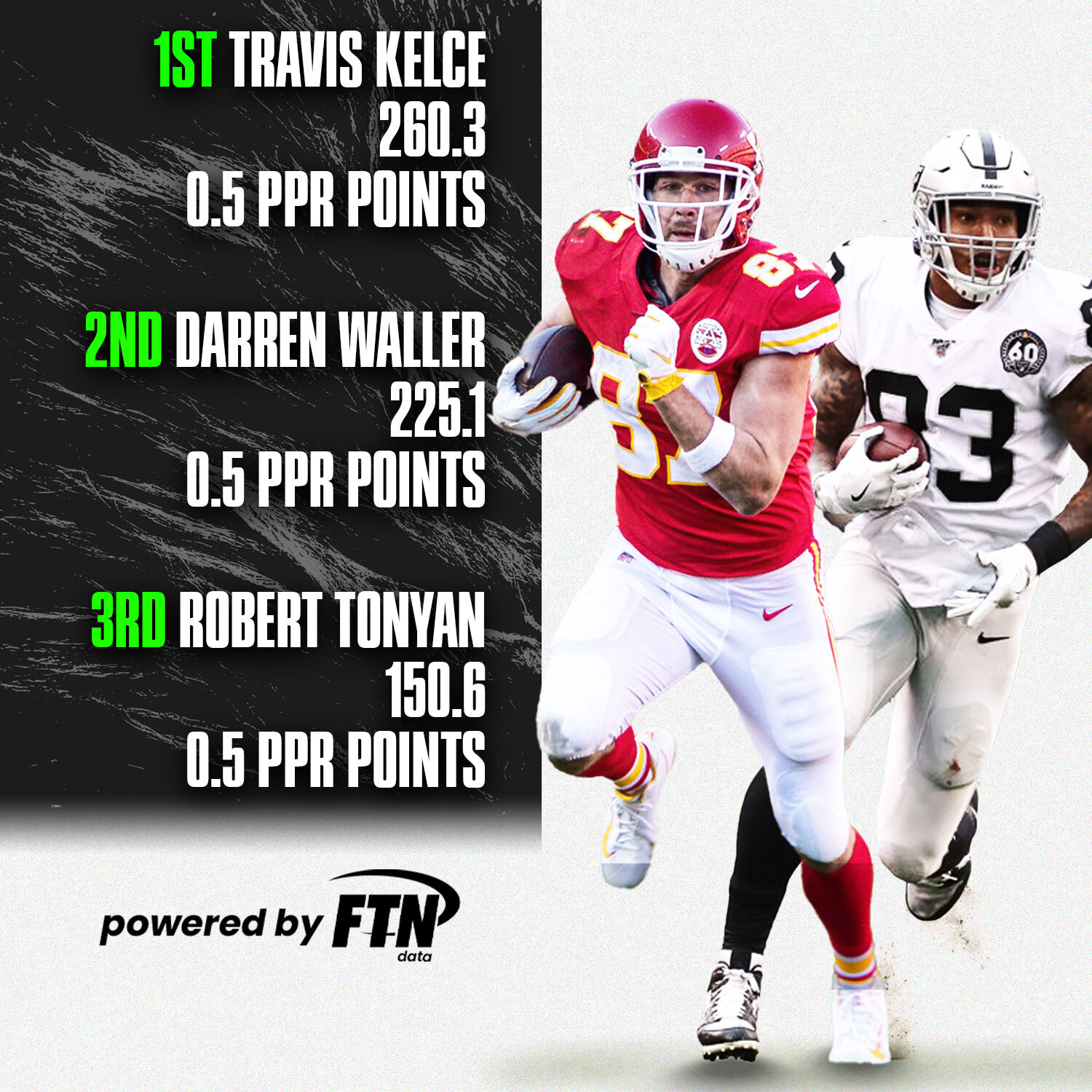 While early tight end isn't a unique strategy, it is still not widely adopted, so it gives you a serious advantage. Kittle is in this tier when healthy, though he has never scored more than five touchdowns in a season and plays in a low volume pass offense (potentially with a rookie QB) with two other stud receivers, so he is a distant third. If I miss on these guys, I am comfortable waiting, but Pitts and Hockenson are the next two I would target. Pitts is the best tight-end prospect in a long time and with no Julio Jones in Atlanta, he has the upside you need to compete with Waller and Kelce. Hockenson is currently competing with Breshad Perriman, Amon-Ra St. Brown, and Tyrell Williams for targets, so he has the potential volume upside as well. If I don’t get two of the top three tight ends, I am drafting at least three to be able to compete.

Here is a look at the players I am going after at each position in this format, as three-man strategy is very different from standard best ball.