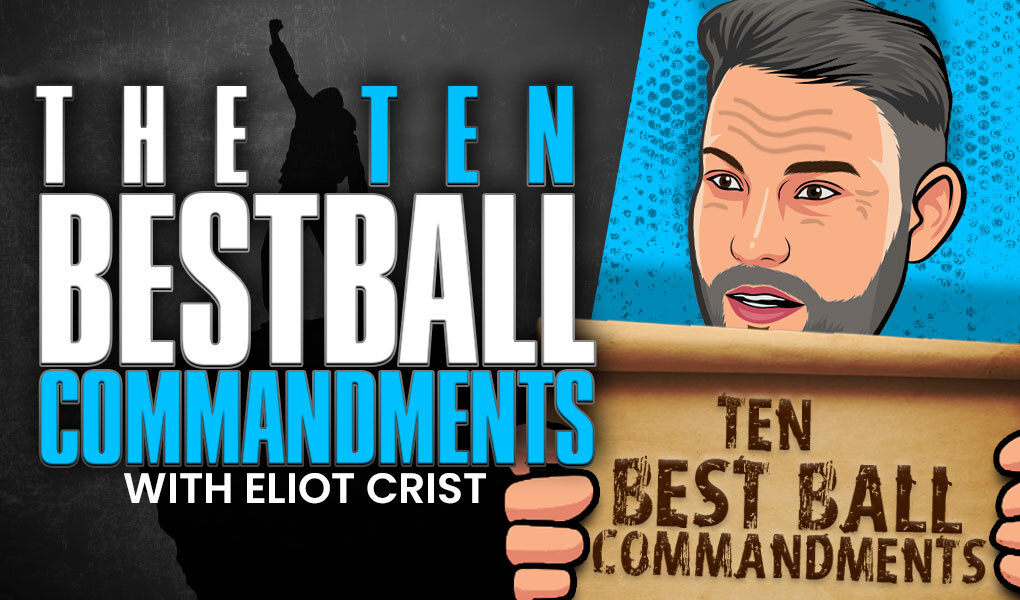 FTN's Eliot Crist offers up his list of rules for participating in best ball drafts.

We’re all familiar with the 10 commandments as a set of guiding principles. Today, it’s time to introduce the 10 best ball commandments that people should consider just as important … or at least that’s what my ego wants to believe.

Either way, it’s important to set rules for yourself in fantasy football and understand the dos and don’ts of drafting, so here are my 10 commandments for best ball drafting:

We all love a draft — sometimes the clock goes too quick, sometimes we are in a slow draft and enjoyed too much tequila the night before and the timer expires on us. Whatever the case, it is important to set roster limits. This protects you from drafting lopsided teams that simply don't have a chance to compete. Your roster limits should be set at 3 QBs, 6 RBs, 10 WRs, 3 TEs. This way, while the pick may not be ideal, the roster construction doesn't sink you.

2. Give me upside or give me death in late rounds

If you can get guys in Rounds 15-18 in best ball drafts who can contribute three or more weeks to your team, you are ahead of the curve. Give me guys who have a chance to have spike weeks. Target guys who are in explosive offenses, who are big-play threats, or who have a clear path to a major role with just one injury.

So often we like to discuss players for their flaws. The entire industry is down on Kadarius Toney because of his analytical profile and crowded receiving group in New York. This is known and baked in his ADP. People are double counting the negatives and ignoring positives, don’t be one of those people.

You want to understand bye weeks the more the draft progresses, but in the first half of the draft, go with your top-rated players and follow your strategy. You don't want to break up a monster squad because of having multiple players with the same bye week.

When it comes to news, we want to have a steady drumbeat from multiple sources. It needs to be multiple days and weeks in a row of saying a player is improving, seeing an increased role, or playing poorly. Too often, Twitter has a day with a player and people overreact in that day’s draft.

6. Stacks are important, but they aren't life

We want to stack quarterbacks and receivers, running backs and tight ends, multiple receivers from the same team. But we don’t have to force it. Hayden Winks of Underdog has some fantastic research that shows reaching multiple rounds from stacks hurt your chances of winning.

7. ADP is a barometer, it's not everything

From Andrew Phillips’ piece on best ball strategy, it’s clear that it’s ok to reach. You can take a guy with a Round 9 ADP in Round 8 — in fact, it creates a different roster construction that will differentiate you in tournaments like the Best Ball Mania. ADP is a daily moving target.

You don’t ever want to back yourself into a corner on a player. People love to say they will never draft X player because he stinks. But everything should be cost-based analysis. Everything with best ball is about building a portfolio of players, and when guys slip that's the best time to get exposure to guys you are lower than. Assuming you are going to be right about every player is a fool's errand, and you shouldn't draft like you are running a fool's errand.

9. When I invite you to a draft, draft with me

If you are reading this, you are my people and I love drafting with my people. Let’s have fun and hit me up on Twitter and in chat and let's talk about how the draft went.

You won’t find better, more in-depth coverage on the internet than right here. Join the family and let's crush some drafts!