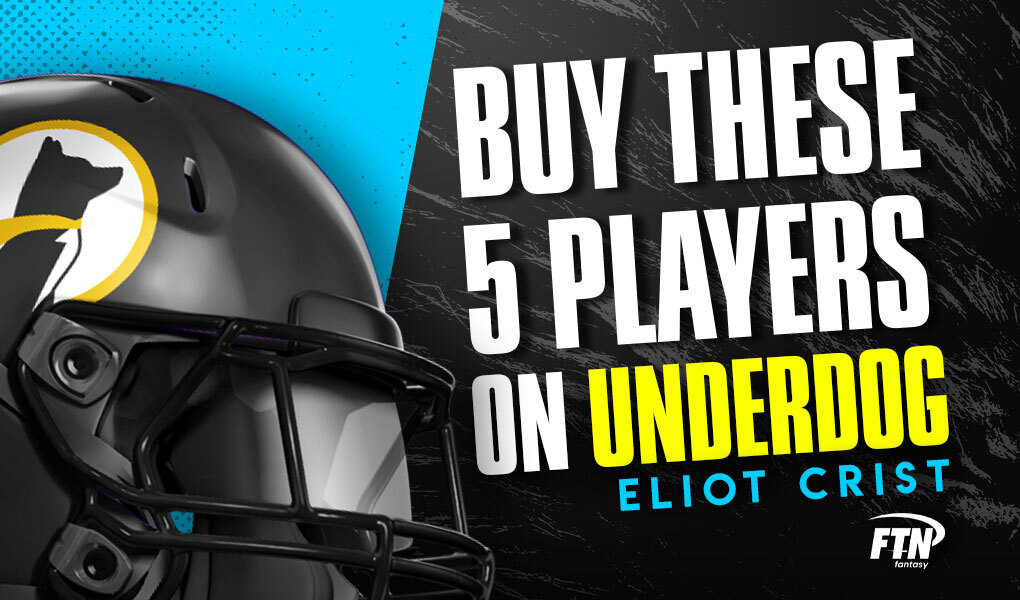 Buy these 5 players on Underdog Fantasy

Underdog ADP shifts every day as the craze of zero-RB and hero-RB takes over. Receivers are moving up the board and running backs are falling down it. As drafts become less of fantasy football Twitter-heavy and more casual drafter-laden, expect running backs to move back up the board and ADP to shift back some.

There are plenty of values in every draft — regardless of your strategy — who can be staples of your exposures that I expected to produce high win rates this season.

Let’s look at five players I am targeting on Underdog this year.

Travis Kelce is a player I am targeting, as he is a cheat code in fantasy football, scoring 110 more points in 0.5 PPR (Underdog’s format) than last season’s TE3. Kelce was a “resting the last game of the season” away from leading the NFL in receiving yards as a tight end and would have finished as a top-four receiver. I am willing to take Kelce as high as fourth overall in tournaments, as not only is he an advantage, but taking him that early will create unique roster builds around him and allow you to be different in playoff weeks. Kelce saw 23% of the team’s targets and 24% of the air yards, catching 105 of 145 targets for 1,416 yards and 11 touchdowns. One big thing to keep in mind is the Chiefs did not start airing it out until the back nine of the season, averaging eight more pass attempts per game than in the first seven games. At that point, the usage for Kelce and Tyreek Hill’s usage increased significantly, and Kelce’s current 82-plus yards in eight straight games is the second-longest streak in NFL history.

For the life of me, I cannot figure out why Michael Thomas is going so low in drafts. But hey, I will keep gobbling him up in the third round as long as I can. People are worried about Drew Brees leaving and being replaced by Jameis Winston, but that is misguided. Brees was not the same player last year, and the last time Winston started a full season his top receiver (Chris Godwin) finished as fantasy’s WR2 overall. Who was WR1 that season? None other than Thomas, who finished with 67 more points than Godwin, demolishing the field. Thomas has less competition for targets than any other top receiver in football after the Saints lost Emmanuel Sanders and Jared Cook and replaced them with no one of relevance. Last year, Thomas was injured, missed a ton of playing time, and failed to score a touchdown on the season, burning everyone who took him top eight as last season’s consensus WR1 overall. That bad taste has put Thomas at a deep discount this season despite leading all players (min. 50 targets) in football with 48% of his team's air yards and seeing 30.3% of his team’s targets. On top of that, he still plays for one of the best play callers in football and is playing nine of his 17 games in a dome. Every time Thomas is there in Round 3, he should be a strong consideration.

D.J. Moore is a WR1 in fantasy football

While getting the 1.01 and starting with Christian McCaffrey, Michael Thomas and A.J. Brown feels like a cheat code, starting in the back end of the first round excites me as well because I can grab D.J. Moore to kick off the top of the fourth round. Moore was one of only three receivers to have eight or more games with at least 93 yards — Stefon Diggs and Calvin Ridley were the others, and they both finished as top-five fantasy receivers. Touchdowns were a big issue for Moore as he only scored four, but he was second in the NFL with a 37% end-zone target share, so if the opportunities go up, he could spike in the scoring department. Moore finished 11th in total yards last year, but only 29th in catchable target rate. With Sam Darnold being a better intermediate and deep passer than Teddy Bridgewater, even the slight QB upgrade could vault Moore into the top five. He is being drafted as his floor right now, and that price tag has made him the player I have the most exposure to.

In 10 games last year with Damien Harris, James White saw 45 targets. The next closest among the team’s running backs was no-longer-on-the-team Rex Burkhead, with 17, and Harris came after that with 7. White was second among running backs in all of football in first-read share — 12.7% of the time he was on the field, the original play design was to throw him the football. He led all running backs in target share when on the field at 31%. He has established a role with the offense, and if Mac Jones becomes the starter, White could return to his 2018-2019 form — he was RB8 in 2018, RB22 in 2019. As RB51 off the board, White’s price tag makes him a no-brainer pick.

Do not forget to draft Justin Fields in best ball

I wrote about the Konami code and how important running quarterbacks are in fantasy football. There are very few quarterbacks on the planet who can touch Justin Fields’ athleticism and rushing upside. Fields stands 6-foot-3, weighs 227 pounds, and ran a 4.46 at his pro day. Of last season’s top 10 fantasy quarterbacks, only two finished with fewer than 200 rushing yards: Tom Brady and Aaron Rodgers, who both had to throw for over 40 touchdowns to reach their finishes. The reason you can a discount on a player like Fields is because of the uncertainty. Andy Dalton is the projected starter, but the Bears traded up to the 11th overall pick to take Fields. Dalton may start Week 1, but he won’t start for long, and once Fields takes the field he will vault to a top-10 weekly status. The uncertainty of playing time has his price depreciated — take advantage.