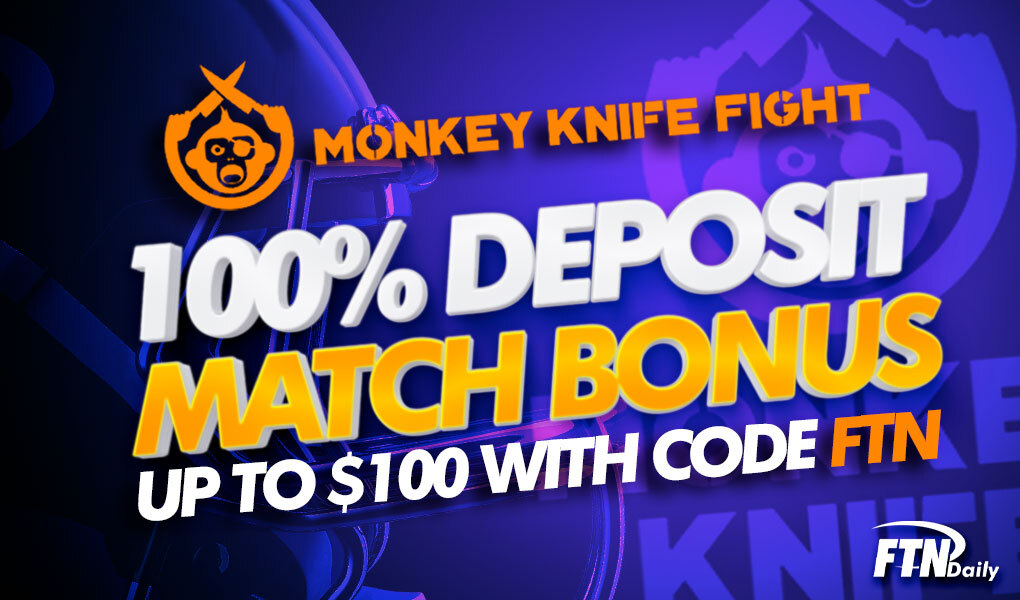 Tyler Loechner looks at all the ins and outs of playing DFS on Monkey Knife Fight, the best Monkey Knight Fight promo code, how to play, and how to win on MKF.

Itching for some daily fantasy sports gaming, but don’t want to worry about drafting an entire team or having to think about every single game happening today? The OG crew over at Monkey Knife Fight has been paving the way for a new, easier way to play fantasy sports every single day.

Monkey Knife Fight is technically considered a DFS game, but the overlap with sports wagering on player props is apparent. If it feels a bit overwhelming at first — don’t sweat it. We have you covered with this detailed breakdown of Monkey Knife Fight for fantasy players and prop enthusiasts.

You will find out the best Monkey Knight Fight promo code, how to download the app, what MKF is, and more.

To get the best bonus for new players, use promo code FTN. This promo code gets you a $100 deposit match to help you grow your bankroll. Here is how to take advantage.

What is Monkey Knife Fight?

Monkey Knife Fight is a DFS platform that was founded in 2017 and is headquartered in the United States.

Instead of playing against other players in DFS contests (like you do on DraftKings or FanDuel), you play against the house on Monkey Knife Fight. That takes a lot of stress out of playing DFS. You don’t have to worry about missing out on some sub-2% rostered contrarian player going off and leaving you out of the money. All you have to do is beat the lines set by MKF.

How does Monkey Knife Fight work?

There are several ways to play Monkey Knife Fight. These include More or Less, Rapidfire, and Stat Shootout (including Touchdown Dance and Fantasy Challenge).

How to play More or Less on Monkey Knife Fight

The most common and popular is called More or Less, where you simply choose whether a player will go over or under a stat line given by Monkey Knife Fight.

Both of your “More or Less” picks have to be right — similar to a parlay in sports wagering — and you win 3x your buy-in.

How to play Rapidfire on Monkey Knife Fight

In Rapidfire, there are two matchups for you to decide between. Will QB1 or QB2 have more passing yards? What about RB1 vs. RB1 for rushing yards? If you get both right, you win 3x your money.

Touchdown Dance brings Anytime TD Scoring prop bets straight to fantasy — and you get to adjust the line for your own risk enjoyment.