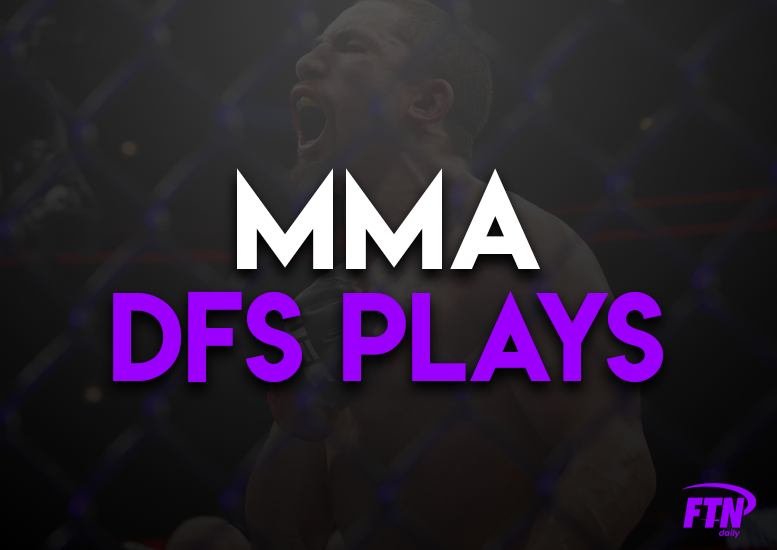 Welcome to my DFS breakdown for UFC Vegas 36: Till vs Brunson. After a fight night card that didn’t quite go our way last weekend, the UFC is back at the Apex in Las Vegas for an event headlined by two men potentially competing for a chance to fight Israel Adesanya for the middleweight title. This card is currently scheduled to have just ten fights, which is a substantially lower number than usual and should be changing the way that we approach this slate. Jon Kelly and I went over lots of general slate strategies on The Undisputed MMA Show this week, but I think the main points to be taken are that GPP winning scores are likely to be lower than normal, and it makes sense to target fighters with high chances to win while sacrificing some potential upside. Additionally, every fighter across the board will be higher owned than they would be on a 12-15 fight slate, so if you have a strong take this week don’t be afraid to plant your flag and get well over/underexposed to certain spots on the card. I’ll be in the FTNBets Discord leading up to Saturday's slate to discuss last-minute changes and additional general slate strategy!

This is a no-brainer pick at the high tier this week. Shore finds himself as nearly a -600 favorite against Liudvik Sholinian on Saturday, which is the biggest favorite on this card by a large chunk, as there is only one other fighter that’s even a -200 favorite! Shore is also a favorite to win inside the distance and always relies on a grappling-heavy gameplan. The undefeated Welch prospect is 3-0 in the UFC and has averaged over 100 DK points. Shore is such an obvious play this week that he’s likely to be massively owned, but I’d rather get different in other places and just lock in the nearly guaranteed strong score from Shore at an affordable price.

This is a type of play that normally wouldn’t make the cut for this article if we had a normal-sized slate, but with just ten fights this weekend I have found myself intrigued with Barriault at the midrange. Barriault isn’t a massively hard hitter nor is he somebody who we can safely project for multiple takedowns in a fight which is what we are normally targeting in DFS, but he has a nice stylistic matchup this week that I think he wins a good amount of the time against Dalcha Lungiambula. Dalcha is a solid wrestler, but gasses out in nearly every fight he’s in. Meanwhile, Barriault has proven his cardio and durability before, which should allow him to take over late in this fight. If Dalcha gasses out, this fight could look like Barriault’s last fight, a win over Abu Azaitar, where Barriault scored 132 DK points and ended up breaking the slate with the number of cumulative points he was able to rack up late in the fight.

During my writeup for Jack Shore in the high tier portion of this article I had mentioned that “I’d rather get different in other places” on this slate, and I think the co-main event provides a great opportunity for that. I believe many people will begin their builds this week with a combination of Jack Shore and Tom Aspinall at the two highest-priced fighters on the slate. While I’m fine eating the Shore chalk, I think there is a ton of leverage opportunity in the Aspinall fight, where you can not only fade him but also play his opponent, Spivac, at low ownership. Spivac is a grappling-first heavyweight who has shown a legitimate ceiling in DFS before. While Aspinall has a striking advantage in this fight and is the second-largest favorite on the slate, I am just not all that sold on him being a fighter worthy of this price tag yet. He has yet to really be extended in a UFC fight and has a losing record in his career when fights have left the first round. His cardio is suspect at the very best, and we’ve seen him put on his back before prior to the UFC. I don’t think Spivac is some sort of lock at all, in fact, Aspinall is still a solid player in DFS due to his early finishing upside, but we need to get different somewhere on this slate and this is the spot I’ve found myself going to.