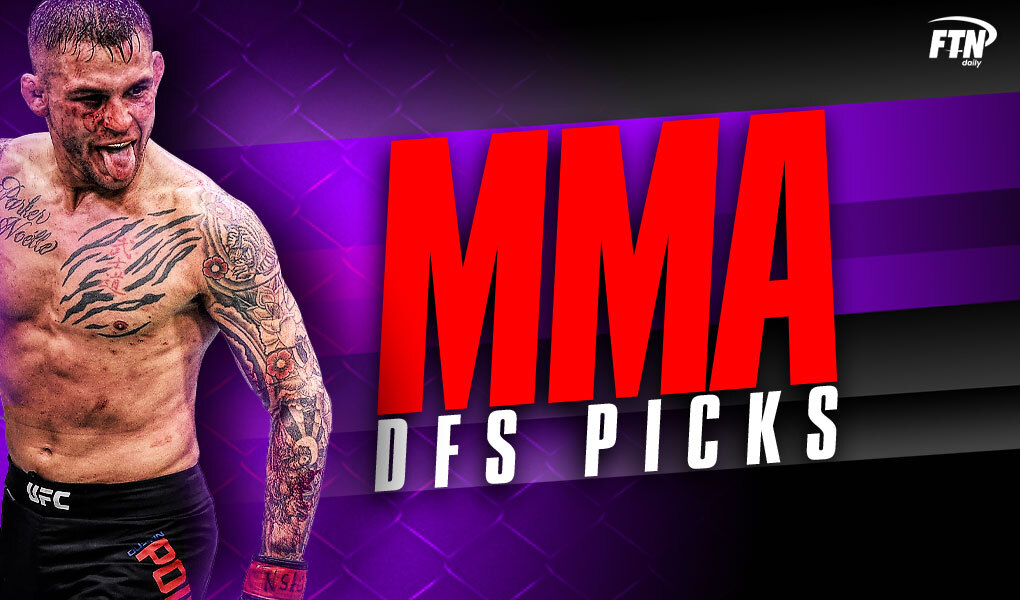 Welcome to my DFS breakdown for UFC Vegas 38: Santos vs Walker! After an awesome PPV offering last weekend that featured a fight of the year contender between Alexander Volkanovski and Brian Ortega at T-Mobile Arena in Las Vegas, the UFC will remain in Sin City, but head back to the Apex facility for this weekend’s fight night event. In the main event this weekend, we have two massive hitters at light-heavyweight who should provide plenty of fireworks, though the rest of the card appears to be somewhat middling. However, we know that the quality of fights doesn’t mean a ton for DFS, and what does matter is the fact that we have 13 fights slated for Saturday night. I’ll be in the FTNBets Discord leading up to Saturday's slate to discuss last-minute changes and additional general slate strategy!

Although O’Neill doesn’t project as the best scoring fighter at the high range of pricing this weekend, I think she provides as much upside as anybody on the slate and I am slightly lower on the top fighters than normal. O’Neill is a -200 over Antonina Shevchenko, the sister of the current flyweight champion. Coming into the UFC I wasn’t very high on O’Neill, she showed some upside but is just 23 years old and had five professional fights. Although I’m not sure my long-term opinion on O’Neill has changed much despite her 2-0 start in the UFC with two finishes, the fact of the matter is she’s going to be a very strong DFS play in the right matchups. O’Neill’s best quality as a fighter is her hyper-aggressive style which puts her in danger of being hit, but allows her to force clinch scenarios where she has decent takedowns and a solid top grappling game. Albeit a small sample, the Australian prospect has landed 3.47 takedowns per 15 minutes inside the octagon, and Shevchenko has defended just 50% of takedown attempts against her. In Antonina’s three UFC losses, she’s been taken down a combined 11 times, and O’Neill is currently a -200 favorite headed into the weekend. I like the ideas of semi-balanced lineups featuring O’Neill, Aspen Ladd, and Thiago Santos at the top end this weekend.

I normally ignore the main event each week in this article just because it feels obvious that in cash-game formats you need at least one main event fighter, and oftentimes they’re strong GPP plays as well, but I’m making an exception this weekend for the Santos vs. Walker fight because I have a semi-strong opinion on the matchup, and the fight should be DFS gold. Oftentimes when discussing DFS, we get caught up in trying to analyze things like fantasy points per minute or fighters who feature a very DFS-friendly style of fighting with lots of grappling, but it’s important to keep in mind (especially in tournaments) that there is no stronger positive correlation in MMA DFS than first-round finishes and ceiling performances. I believe Santos has an incredibly high (30%+) chance of finishing Johnny Walker in the main event this weekend. Santos has dropped three straight fights dating back to his title shot against Jon Jones two years ago, but those were difficult stylistic matchups that featured a good amount of grappling when Santos is primarily a striker. This weekend though, Walker is going to be a willing dance partner in the striking against Santos, and I have major concerns about Walker’s durability. He has only been knocked out once in the UFC, but he was knocked down twice in less than three minutes before his comeback win over Ryan Spann last September. I’ve seen this guy rocked on the regional scene several times. This is a fight that I will likely lock into 100% of my lineups this weekend, with a significant lean towards the Santos side as a favorite.

I’m writing up Daukaus and Mullarkey together this weekend because they’re priced very similarly, and both make for strong DFS plays due to similar reasoning. Daukaus is fighting Kevin Holland and Mullarkey is fighting Devonte Smith, both of whom are predominantly strikers and have shown worrying signs in the grappling aspect of MMA before. Both the underdogs are willing grapplers, with Daukaus landing nearly two takedowns per 15 minutes and Mullarkey bordering on four takedowns per 15 minutes inside the UFC. The betting line for both of these fights have gotten closer since DK released their pricing as well, meaning we get nice value on DK prices compared to the betting market implied win percentages. I can’t guarantee a win for either guy this weekend, but I do think there’s a 65%+ chance that one of these guys wins this weekend and has a good chance to be optimal if they can get the job done via multiple takedowns. Lastly, neither guy is drawing dead in the striking aspect of their fights. Daukaus has solid boxing, and although Kevin Holland is known for being a solid striker, I would not be shocked to see Daukaus compete on the feet. Mullarkey is a less technical striker than Smith by a good amount and is likely at a power disadvantage, but he showed in his last fight that he’s capable of putting guys out at the UFC level and is content to stand and trade with most opponents before attempting takedowns.