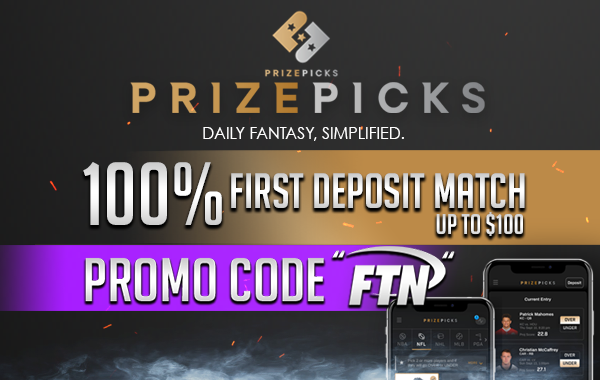 The NBA playoffs are in full swing and we’ve got a two-game DFS slate on tap. Even though we are into the postseason, our friends over at PrizePicks still have us covered with tons of options on the board, both fantasy point and single stat offerings. Let’s get into it.

If you aren’t familiar, I bet you’re wondering just what the heck is PrizePicks? For an in-depth look at the app, check out this PrizePicks Review by FTN’s Tyler Loechner.

How to Play PrizePicks NBA

PrizePicks is a creative new way to parlay picks based on expected fantasy point production!

The format is simple. PrizePicks will set fantasy point or single stat lines for select players and then you choose between two and five players to go over or under their given projection. Naturally, the more players you put into your parlay, the larger the payout! You can enter a “Power Play,” where you must get every pick in your parlay correct to get paid out. Another option is a “Flex Play,” where your payout changes depending on the number of picks you got correct.

Tonight the first NBA action locks at 7:40 PM ET on PrizePicks. Note that these lines can shift throughout the day leading up to lock just like a spread or money line on a game! They will also occasionally add players as the day goes on if injury news changes the outlook for a team. Tag me in the FTN PrizePicks discord channel (which is FREE) up until lock if you want a second pair of eyes on a parlay you’re considering or for help on lines that may have changed since this writing!

Here’s a look at my favorite picks on the NBA board at PrizePicks today.

Here are the combinations I have placed on PrizePicks so far this morning, all as “Power Plays:”

I’m not a huge fan of doing the largest offering of a five-way parlay on a daily basis, but if I was to run one out there today on PrizePicks, here’s what I would throw in!

Zac Graham (aka Kawhisenberg) joins FTN as an NBA DFS specialist and has been a prominent name on 20-max entry NBA GPP leaderboards since 2014. Kawhisenberg’s DFS hoops success isn’t limited to NBA regular and postseason contests though, as he has been notably profitable in contest offerings for NBA Summer League, NBA Preseason, WNBA, TBT, FIBA, Euroleague and the Olympics. A college basketball coach by day, he hopes to bring a unique approach to helping FTN subscribers improve their DFS process and results!