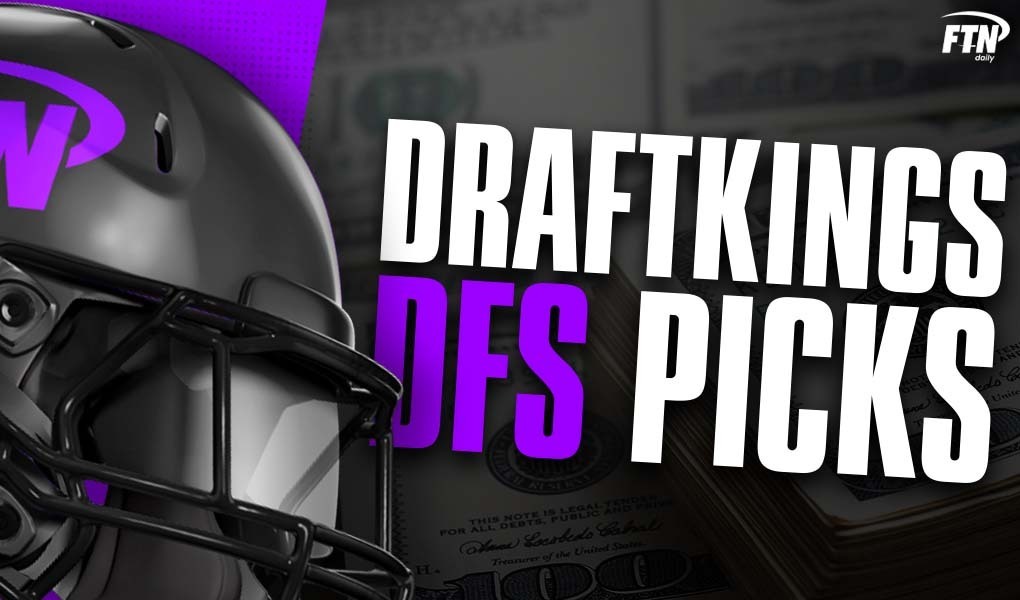 The NFL is on to Week 2. Week 2 might not have the same excitement as Week 1, but there is still plenty of money to be won in DFS. There are still two Milly Maker contests on both DraftKings to go along with all the other tournaments, cash games, and satellites.

Let’s dive into some of my favorite options at each position.

Brady just turned 44 years old, but he’s arguably as good as he’s ever been. He started his season strong last week vs. the Cowboys, racking up 32.16 DraftKings points thanks to 379 passing yards and four touchdowns. He did throw two picks, but one was due to a drop and the other was a desperation endzone heave at the end of the first half.

He’s poised for another big week vs. the Falcons. They allowed Jalen Hurts to average 9.26 adjusted yards per attempt with three passing touchdowns, and Hurts is known for his legs more than his arm. They were also one of the worst pass defenses in football last season, so Brady should be able to have a field day.

The total on this game currently sits at 52.0, and Brady has crushed in games with a total of at least 50 points as a member of the Bucs:

Brady is just the fourth-most expensive quarterback on the main slate, but he owns the highest projection in our NFL Optimizer. That’s a nice combination.

Herbert is an interesting pivot off Brady on this slate. The Cowboys are a very friendly matchup, and the total on this game sits at a slate-high 55.5 points. Herbert also provides a bit more ability with his legs than Brady, which always appealing for GPPs.

Mayfield is very underpriced for a matchup vs. the Jaguars. They were one of the worst passing defenses in the league last year, and if Week 1 is any indication, they’re not going to be much better this season. They were shredded by Tyrod Taylor, and the Browns’ implied team total of 30.25 points trails only the Bucs’ mark on this slate.

The stud running back trio of Christian McCaffrey, Dalvin Cook, and Alvin Kamara are all available on this slate, and you certainly can’t go wrong with any of them in tournaments. However, there are plenty of stronger options on a points-per-dollar basis.

Montgomery is one of them. He has been on a major heater since the end of last season, and he followed that up with a strong performance vs. the Rams in Week 1. The Rams have one of the toughest run defenses in football, but Montgomery still racked up 21.8 DKFP on a pretty modest workload.

He should find himself in a better game script vs. the Bengals this week. The Bears are listed as home favorites, and Montgomery thrived in that role last season:

The Bears’ decision to stick with Andy Dalton makes absolutely no sense, but it means Montgomery should be busy on Sunday.

It’s hard to ignore Elliott at such a cheap price tag. He was absolutely stonewalled last week vs. the Buccaneers, but they possess arguably the top defense in all of football. His matchup vs. the Chargers has the potential to be significantly easier. They were able to stuff Washington’s run game last week, but they finished just 26th in Football Outsiders’ rush defense DVOA last year. Zeke was a consistent first-round pick in fantasy drafts this summer and is reportedly in the best shape of his life, so there’s no reason he should be this cheap.

Head coach Bruce Arians put Jones in the doghouse after a fumble in Week 1, but he told reporters he would start this week vs. the Falcons. It remains to be seen if that’s the case, and the best-case scenario is probably some sort of timeshare with Leonard Fournette. Still, Jones would be in the perfect scenario if he does sees the majority of the running back touches vs. the Falcons. He’ll take the field as a massive favorite, and massive favorites have historically provided huge value at running back.

This price tag on Kupp is absolutely ridiculous. Kupp is coming off a monster game on Sunday Night Football vs. the Bears, racking up seven catches for 108 yards and a touchdown. He also saw a team-high 10 targets, so it seems like he has developed quick chemistry with Matthew Stafford.

Kupp plays most of his snaps from the slot, which sets up an excellent matchup vs. Kenny Moore II. He was a turnstile last week vs. the Seahawks, and he allowed Tyler Lockett to put together a huge game. Overall, opposing receivers averaged 0.55 fantasy points per route run vs. Moore in that contest, so Kupp should be able to win this matchup easily.

The Dolphins have a pair of excellent corners in Xavien Howard and Byron Jones, and Diggs is coming off a relatively quiet performance last week. That said, he finished with 14 targets, which was tied for the fourth-highest mark at the receiver position. He owns the top projection at the position in our NFL Optimizer.

Marquez Callaway, New Orleans Saints @ Carolina Panthers ($4,200) -- Callaway was a massive disappointment last week, but he had a number of factors working against him. He had a brutal matchup vs. Jaire Alexander, and the Saints also steamrolled the Packers. Jameis Winston only needed to attempt 20 passes in that game, so the pass-catchers unsurprisingly had minimal opportunities.

As long as this week’s game is competitive, Callaway should be looking at a much bigger performance. He’s still expected to operate as the team’s No. 1 wide receiver with Michael Thomas sidelined, and the Panthers don’t have anyone nearly as intimidating as Alexander at corner.

Ja’Marr Chase, Cincinnati Bengals @ Chicago Bears ($5,000) -- Turns out, maybe Chase is ready for NFL football. He put together an excellent pro debut, finishing with five catches for 101 yards a touchdown, and he had opposing defensive backs on skates all day:

This could be the last chance to buy-low on a big-time young talent.

The Broncos were dealt a tough blow in Week 1, with Jerry Jeudy going down with a high-ankle sprain. Luckily, they have plenty of playmakers available to pick up the slack. They still have Courtland Sutton, K.J. Hamler, and Tim Patrick at wide receiver, as well as Fant and Albert Okwuegbunam at tight end.

Fant is the most appealing option at his price tag. He was highly involved vs. the Giants, garnering eight targets, and he finished with six receptions for 62 yards. Fant also has an excellent pedigree after being selected in the first round of the 2019 NFL Draft. He’s a freak athlete at the position, ranking in the 95th percentile in virtually every measurable available per PlayerProfiler.

Waller had 19 targets on Monday Night Football and was basically Derek Carr’s first read on every throw. I don’t think much more needs to really be said. He’s the clear alpha at tight end this week with Travis Kelce not available on the main slate.

No one at the position ran a higher percentage of pass routes in Week 1 than Higbee:

That’s a potentially huge development for his fantasy stock, especially with Gerald Everett now in Seattle. He could be looking at a huge season.

Matt LaMarca has covered sports betting and daily fantasy sports full time for the past five years, and his work has been featured at sites like FantasyLabs, The Action Network, DraftKings, and Rotoviz. He has a proven track record as a sports bettor, using an analytic approach to create trends, study spread movement, and leverage public betting percentages. He has posted a positive ROI in each of the past three years, focusing primarily on the NFL, NBA, and MLB. He was also just one of three fantasy football analysts to go undefeated during the 2019 Scott Fish Bowl, which pits 1200 teams against each other in an industry-wide competition