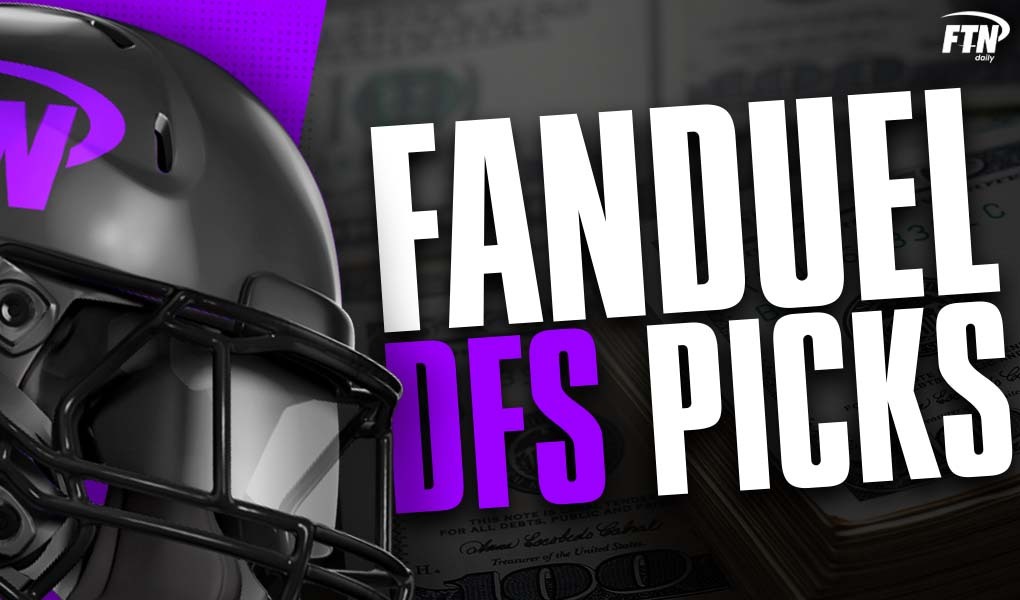 FTN's Matt Kupferle picks out some of the best DFS plays on FanDuel for Week 2 of the NFL season.

Finding the best anchors for your DFS lineup is the best way to start lineup construction, so each week in this space, I’ll be taking a look at a skill-position breakdown of players who stick out on FanDuel. Whether it’s because of matchup or usage or anything else, these are players who should feature heavily in lineups.

Tom Brady is an excellent NFL DFS pick for Week 2

If there's any singular takeaway we should note from the first game for the Buccaneers, it's that they plan to throw -- a LOT. Tom Brady passed 50 times in the first game, logging 379 yards and four scores. This week? A Falcons defense that was absolutely annihilated by an efficient Jalen Hurts. They allowed the most points to an opposing quarterback in Week One as well.

Check out the FTN Tool to see how teams allowed points to opposing positions: https://www.ftnfantasy.com/nfl/pts-allowed

Perhaps it was just a very bad week, but it looked like the Dallas defense is in for a long season, getting shredded by Tom Brady in the first week. And, if that's the case, that will put Dak Prescott in the position of dropping back to pass quite a bit. Prescott attempted a whopping 58 passes, throwing for 403 yards, and he will need to be on top of his game to defeat a 1-0 Chargers team. The Cowboys led the league in a situation-neutral pace a season ago.

Spend up on FanDuel for Alvin Kamara

Lost in the blowout of the Packers, Alvin Kamara was very clearly the man in the backfield for New Orleans, not that we really expected anything less. While he wasn't heavily involved in the passing game, he shouldn't have been in a game script where you are dominating the opponent. But given his 73% snap share, four red zone carries, and 24 total touches, he should be more involved in the passing game this week in a closer contest.

The steady Chris Carson could be a Week 2 value

It's easy to overlook the steady play in favor of the sexier one -- we all do it in facets of life. And Chris Carson perfectly embodies the boring-yet-consistent running back that gives us a solid cash game floor. Here's the reason to believe -- he played on 84% of snaps and the guy most likely to steal some time, Rashaad Penny, was injured in the Week One contest. Keep in mind that all of Seattle's touchdowns were scored through the air -- so some positive regression could be coming his way.

Spend up for Amari Cooper in Week 2

As we highlighted with Dak above, the Cowboys could be playing in shootouts quite a bit this year -- they already played in a 60-point game in Week 1. Now, this week could be a similar story -- AND, Michael Gallup, a pre-season darling of many, was placed on the Injured Reserve following an injury this week. His 28% target market share in Week 1 was already juicy, and with Gallup's seven missing targets, he could be an even bigger part of the equation.

DeVonta Smith is too cheap in Week 2

Despite a strong showing in Week 1, DeVonta Smith seems to be far too cheap. He garnered eight targets in his very first NFL start, and he led the receiving corps in nearly every metric across the board, including snaps. The real kicker? The 49ers' weakness is their secondary, and starting defensive back Jason Verrett went down with what could be a season-ending injury this week. Fire Smith up.

Kyle Pitts is ready to make some noise

Despite opening with a total thud against the Eagles, Atlanta's passing attack looks like it could be busy playing catch-up with the Bucs. Dak Prescott tossed for over 400 yards and dropped back to pass 58 times. and Kyle Pitts should certainly see heavy usage. He ran a route on 90% of Matt Ryan's dropbacks, grabbing 8 targets (tied for the team lead with Calvin Ridley). Slot corner Sean Murphy-Bunting was placed on the Injured Reserve yesterday, and Pitts ran 23 routes out of the slot last week. Expect him to eat.