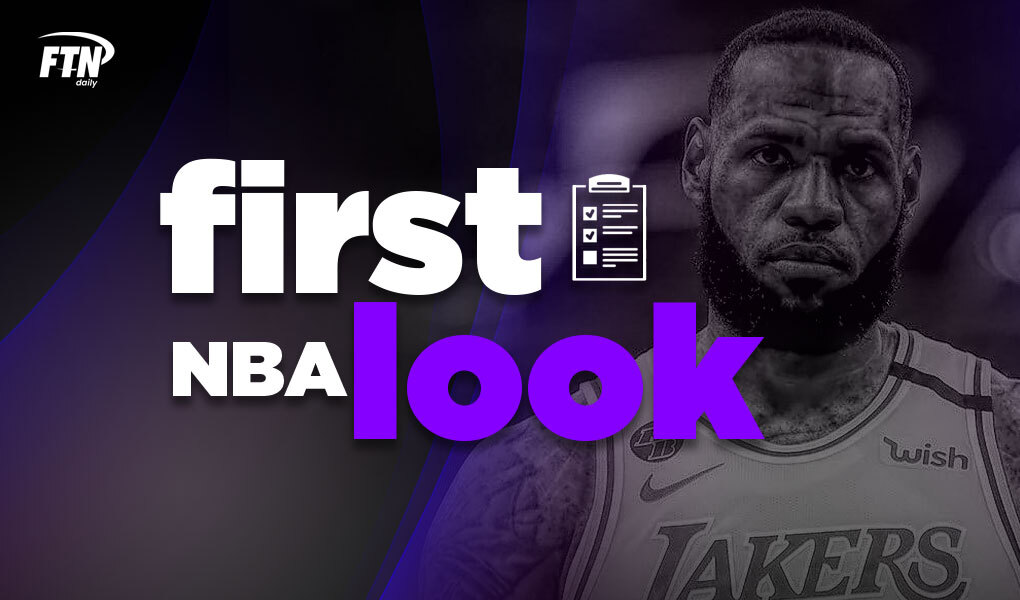 FTN's Adam Pfeifer breaks down the NBA slate for Sunday from a DFS perspective, including the best and worst plays.

We have all-day NBA action Sunday but our attention will be on the six-game main DFS slate in the evening. This certainly isn’t going to be as crazy of a slate as Saturday night’s was, and there are some spots that are flat-out gross but there is still upside to be had in other spots.

These teams just met Friday, and I had very little interest then. Not much changes for Sunday. Dallas will once again be without Kristaps Porzingis, making him absent for nine of the Mavericks’ last 10 contests. Meanwhile, Maxi Kleber is listed as questionable — if he also can’t play, Willie Cauley-Stein and Dwight Powell would split the majority of the minutes at center. Tim Hardaway might be my favorite play from this team if we’re including price tag, as he’s really benefited from the absence of Porzingis. With KP off the court this season, Hardaway is sporting a 25.4% usage rate, while averaging 0.94 fantasy points per minute in the split. And over the last two weeks, that usage rate is hovering over the 28% mark, while averaging well over a fantasy point per minute. Of course, you can always play Luka Doncic, but the Cavaliers have been so, so bad lately that it is a bit scary, especially since Dallas just blew this same team out the other night without Doncic going off.

For Cleveland, I still think Collin Sexton is way too expensive at $9,000 on DraftKings. Yes, Darius Garland is still sidelined, making it his fifth straight absence. And over the last four games with Garland out, Sexton is averaging 94.8 touches per game, good for the seventh-most in the NBA during that span. So on the surface, yes, Sexton looks good in this game. However, the peripherals aren’t there consistently enough to warrant a $9,000 price tag for Sexton, especially in a tougher matchup. I’d much rather play Cedi Osman, who has been in the starting lineup over the last four games, logging 36, 36, 45 and 38 minutes during that span. Meanwhile, Kevin Love, who sat out Friday, is questionable again for Sunday. Dean Wade started in his absence and played 30 minutes and while he isn’t the most efficient player in the world, he’d present some value at just $3,600 with some position flexibility.

All of a sudden, the Pelicans are without their top two players. Brandon Ingram (ankle) is doubtful to play, while Zion Williamson is out indefinitely with a fractured finger. They both were out last game against the 76ers, which led to James Johnson and Naji Marshall entering the starting lineup, logging 26 and 27 minutes, respectively. Being without both Williamson and Ingram is a massive blow and opens up a ton of opportunity for the rest of this Pelicans team. In Friday’s game, Lonzo Ball touched the ball 98 times, way up from his season average of 76.9 per contest. He also posted a 28.3% usage rate and is averaging 1.12 fantasy points per minute with Ingram and Williamson off the court over the course of the season. Eric Bledsoe also makes plenty of sense at $5,600, as he’ll have to play close to 40 minutes in a close game, while Willy Hernangomez remains very intriguing if Steven Adams remains sidelined. With both Adams and Zion off the floor this season, Hernangomez is sporting a 39% rebounding rate while averaging nearly 1.20 fantasy points per minute. And now he gets an elite matchup against a Charlotte team that is coughing up third-most rebounds per game to opposing centers on the year (16.67).

LaMelo Ball is coming off a bounceback game against the Magic, scoring 27 points to go along with six boards and six assists. Since returning from his wrist injury, Ball is sporting a healthy 29.8% usage rate, 21% rebounding rate and 23% assist rate. There is nothing wrong with this matchup, as the Pelicans rank 24th against both dimers and crafty finishers, according to our advanced DVP tool. I still very much prefer him at $8,600 than Terry Rozier at $8,100 due to the guaranteed peripherals you are going to get from Ball.

Mo Bamba is playing out of his mind right now. He has now posted career-highs in rebounds in each of his last three games (15, 15, 18), while posting 46.2, 53.7 and 43 fantasy points during that span. We’ll see if Wendell Carter (eye) returns to the lineup after missing the last few games but if he remains out, I still think you can consider Bamba, even at $7,000 on DK. Over the last week, he is sporting an insane 44% rebounding rate while averaging 1.36 fantasy points per minute during that span. Very quietly, the Magic are suddenly not a cheap team in DFS, as Cole Anthony is pushing $7,000, while R.J. Hampton is pushing $6,000. I’d be willing to consider Anthony in this spot, as Minnesota ranks 28th against dimers and 27th against primary ball handlers this season, while Anthony is still averaging 6.01 seconds per touch on the year, good for the fourth-most in all of basketball.

For Minnesota, D'Angelo Russell was ejected in the third quarter Friday, finishing the game with nearly 29 fantasy points in 26 minutes. He continues to start for Minnesota and has been playing pretty well lately. The price is up but this is a solid matchup, as Orlando ranks 23rd against scorers this season. The Magic are also allowing the second-most points per possession off isolation this season (1.01), as well as the worst field goal percentage off the play type (46.2%). That bodes well for Russell, as well as Anthony Edwards, who leads the team in isolation scoring (2.3 points per game). But at $8,300, Edwards is pretty risky, and I’d feel better about playing Russell at $700 less. Of course, you can still look to Karl-Anthony Towns, but I also don’t hate Jared Vanderbilt at $4,100 on DraftKings here.

Jerami Grant, Cory Joseph and Mason Plumlee were all active for the Pistons Saturday night, but don’t be surprised if they sit Sunday. Detroit is not interested in winning games, and this is also the second end of a back-to-back. If all three suit up again, it really limits my interest in this team, especially because a lot of the players have been priced up a bit. If they sit, you can consider Isaiah Stewart in a good matchup, as he’s averaging a solid 12.3 points, 9.7 rebounds and 2.3 blocks per game in 12 starts this season.

Meanwhile, the Bulls players aren’t exactly cheap either. Zach LaVine is $9,800 on DraftKings, while Nikola Vucevic is at $10,600. If this were a larger slate, I wouldn’t be as high on Vucevic but with just six games and some center options unavailable, it makes sense to go to Vucevic, who has such an insanely high floor. Even with LaVine back in the lineup over the last two games, Vucevic has eclipsed 60 fantasy points both times. Coby White is also coming off a great game but at $7,100 with LaVine in the lineup, I’m really not all that interested.

Anthony Davis is probable to play with a calf injury and is coming off his best game in a long time, scoring 36 points to go along with 12 rebounds and five assists. He posted a 36.3% usage rate in that game and should continue to see plenty of touches with both LeBron James and Dennis Schroder out of the lineup. With both players off the floor this season, Davis is sporting a usage rate of 37.6% to go along with a 22% rebounding rate and 1.34 fantasy points per minute. Meanwhile, Alex Caruso is questionable with a foot injury, but he’s played through it each of the last four games, starting every contest and averaging just over 29 minutes per game. And at $4,200, even Kentavious Caldwell-Pope is viable, as he’ll play 35 minutes or more in any competitive game, especially with Kyle Kuzma listed as doubtful. His absence will open up more secure minutes for Talen Horton-Tucker, Wesley Matthews, Markieff Morris and Ben McLemore. Horton-Tucker is also questionable, however, so keep an eye on his status.

For Phoenix, I still like Chris Paul at his $7,800 price tag on DK. And as I seemingly always do, I prefer him at his price to Devin Booker at his ($8,400). Meanwhile, with Cameron Johnson once again ruled out and Jae Crowder back in the lineup, he becomes a viable value option at $4,000. He only played 23 minutes last game, but the Suns won that game by 23 points. A closer game could lead to minutes close to the 30s for Crowder.

Once again, Oklahoma City is coming off a blowout loss, as they just don’t have a ton of talent on this team at the moment. Even in a matchup as good as this, my interest is limited, though I do like Lu Dort if he’s active here. His usage rate over the last four weeks has been well over 25%, while he’s attempting plenty of shots. Meanwhile, the Kings are one of the best matchups in all of fantasy hoops.

The Kings are definitely more interesting, however. I don’t think De'Aaron Fox will be back in the lineup, while Tyrese Haliburton remains out. That means we can look at Delon Wright again, even at his elevated price tag. Haliburton has missed the last three games and during that span, Wright is averaging 84 touches and 7.1 minutes of possession per game, while scoring 55, 55.2 and 40 fantasy points. Sacramento is also getting strong minutes from Terence Davis, who is averaging 15 points, 4.0 rebounds, 2.6 assists and 2.6 triples per game over his last five outings. If Harrison Barnes remains sidelined, Davis could once again play 28-32 minutes in a good matchup, especially if this game gets out of hand. It is also a really good matchup for Buddy Hield, who has added more peripherals to his game in the absences of Fox, Haliburton and Barnes. Don’t be shocked if he gets hot from the field here, as Oklahoma City is surrendering the most points per game off screens this season (6.6), while Hield’s 2.7 points per game off the play type are good for fifth-most in the NBA. I also love Richaun Holmes at just $6,800 on DK against a team that cannot defend the post, which also bodes well for Marvin Bagley, though I’d only play him if Barnes is ruled out.