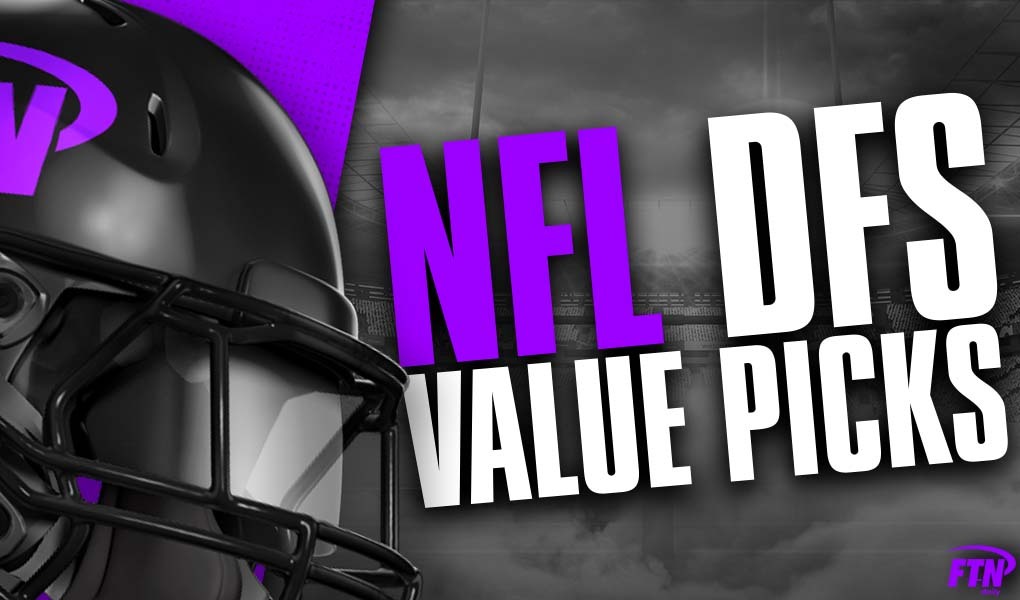 FTN's Adam Pfeifer picks out some of his favorite DFS value plays for Week 6 of the NFL and fantasy football season.

Week 6 is the first NFL DFS slate of the season with byes, and there is also another London game, making Sunday a 10-game main slate as opposed to the massive 13-game slates we saw during the first four weeks of the season.

Between the Chiefs and Christian McCaffrey likely returning to the main slate, we will need to find some strong value this week.

Let’s get after it.

There is a lot to like about the game between Washington and Kansas City this weekend. It features two teams that rank dead last and second-to-last in opponent points per drive this season (3.29 and 2.89). Taylor Heinicke is coming off a down game, but he has still scored at least 23 fantasy points in three of his last four contests. And with Washington’s defense being among the league’s worst, they are sure to be trailing and chasing points against a pissed-off Chiefs team. But the Chiefs defense might actually be worse than Washington’s, as they are allowing opposing offenses to score points on 54.2% of their drives, which is the highest rate in the NFL. Kansas City is also allowing a league-high 28.6 fantasy points per game to opposing signal callers but have specifically struggled to defend the play-action pass. Through five weeks, the Chiefs are surrendering the third-most yards per pass attempt (11.0), as well as a bottom-five completion percentage off the play type. Heinicke, meanwhile, is top-five in the league in play-action pass attempts and passing yards.

If you are looking to really spend down at the quarterback position on FanDuel, you could do worse than Carson Wentz. He is coming off a productive game against the Ravens Monday night where he threw for over 400 yards and a pair of touchdowns. Wentz has been shaky for a while now, but he did look a bit more comfortable in that game, and now he gets to return home to host a Texans team that is coughing up 2.58 points per drive on the season, sixth most in the NFL. Meanwhile, opposing offenses are scoring points on 47.3% of drives against Houston, the league’s fifth-highest rate.

Running Back | DFS Values for Week 6

D'Andre Swift isn’t necessarily a glaring value, but I do believe he is a bit too cheap on DraftKings, a full PPR site. Swift isn’t seeing 20-plus touches per game or anything, but he is seeing very valuable touches for the Lions. That continued in Week 5, as Swift carried the ball 11 times for 51 yards and a touchdown, while adding six receptions for an additional 53 yards. Swift now ranks second among all running backs in routes run (136) and targets (34) on the year, while his 29 receptions pace the position. His floor is insanely high in this offense, as Jared Goff ranks inside the top-five in both short passing attempts and passing attempts behind the line of scrimmage this season. The Lions face the Bengals in Week 6, a defense that just allowed Aaron Jones and AJ Dillon to combine for eight receptions and a receiving touchdown Sunday. For the season, Cincinnati is surrendering the second-most receptions per game to opposing backfields (8.0). Meanwhile, only the Jets are allowing more targets per game to opposing running backs than the Bengals (10.2), setting Swift up very nicely here in Week 6.

After the injury to Saquon Barkley last week, Devontae Booker stepped into an every-down role for the Giants. He finished the game with 19 touches and logged a whopping 88% of the offensive snaps. Barkley is not going to play Sunday, while the rest of the Giants offense is banged up. Kenny Golladay is likely out, and Sterling Shepard and Darius Slayton haven’t practiced in two weeks. Booker is set to see almost all the running back carries, but given the state of the New York offense, he should walk into 4-5 targets as well. With that type of volume at his current price tag, matchup doesn’t matter one bit, but the Rams have been a bit underwhelming against the run this season, allowing 4.5 yards per carry and just over 117 rushing yards per game.

While I clearly love Swift this week, that doesn’t mean Amon-Ra St. Brown isn’t viable as well. The Lions have been throwing to their wideouts more and more each week, and St. Brown has been coming on as of late, seeing eight targets in each of the last two weeks, posting 65 and 70 receiving yards. Detroit lost Quintez Cephus to a broken collarbone Sunday, which means St. Brown will have to play more for this team. He fits what this offense wants to do, as he’s operating out of the slot a healthy 81.5% of the time, good for the seventh-highest rate in football. That means he’ll draw coverage from slot corner Mike Hilton, who is surrendering the most yards (205), receptions (22) and targets (27) while in slot coverage this season. Amon-Ra is a very sudden, impressive route-runner in the short/intermediate range and will get plenty of targets from Jared Goff, who is top-five in pass attempts from the short area of the field.

Will Jakobi Meyers ever score a touchdown? He’s feeling cursed, especially after being tackled at the 1-yard line last week. But what if he does? Because everything else is there for him. Meyers ranks ninth among all receivers this season with 45, while his target share is hovering around that desirable 25% mark. He’s seen double-digit targets in two of his last three games and now gets a matchup with the Cowboys, who have been forcing turnovers but still give up plenty of yardage on defense. Meyers is lining up in the slot around 70% of the time, which means he’ll likely avoid Trevon Diggs in this game. The Patriots are sure to be chasing points here and Meyers is locked into 8-12 targets.

With Logan Thomas on injured reserve, Ricky Seals-Jones got the start at tight end Sunday and was a full-time player, logging 82-of-83 snaps. Only Terry McLaurin ran more routes on the team than RSJ, who ran a route on 42 of Taylor Heinicke’s dropbacks. He was targeted nine times, hauling in five of those looks for 41 yards. Seals-Jones was also very involved when Washington got in close, as he saw three end zone targets. The usage and involvement were fantastic and actually better than Thomas had seen in any game this season. The Chiefs, meanwhile, have now allowed two consecutive tight ends to find the end zone against them and are now allowing the seventh-most fantasy points per game to the position.