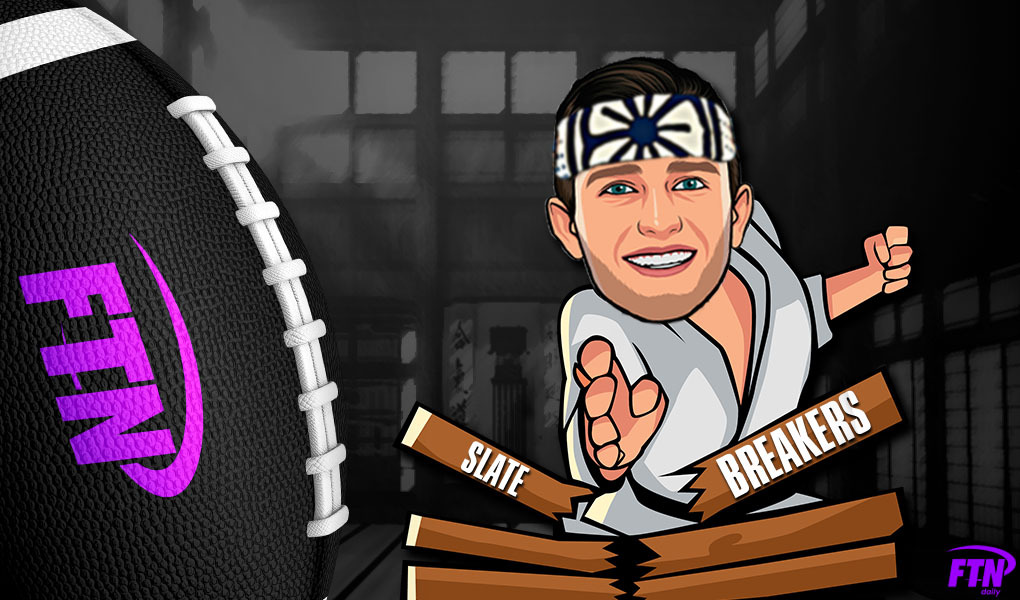 FTN's Tyler Loechner picks out his five choices for players who can break the slate in NFL DFS this weekend.

The phrase “break the slate” is tossed around often in the DFS world, and for good reason. First, it just sounds cool. And second, because it’s actually true.

Eventually, black holes become truth for all. If you own a slate breaker one week, you’re going to win. If you don’t, you won’t. It’s that simple.

Here are the five players most likely to break the slate during Wild Card weekend.

The Eagles technically finished middle of the road against fantasy QBs, but this may be a big reason why:

Joe Mixon had his best game of the season against these same Raiders back in Week 11. In that contest, he exploded for 123 yards on 30 attempts and scored twice. He didn’t even see a target in that game and still scored nearly 30 DraftKings points. It’s worth noting he finished the season with 6 targets and 8 targets in his last two games, both season highs, setting him up for a potentially massive fantasy role in the playoffs. The Raiders allowed the third-most fantasy points to enemy RBs on the year and are the league’s 30th-ranked run D. The Bengals are 6-point home favorites, a game environment that sets up really well for Mixon, per our splits tool:

This is, of course, assuming Leonard Fournette is back — but early-week reports are that he’s trending toward active status. Ronald Jones still looks to be on the wrong side of questionable, setting up Fournette for a massive role. He’s extremely cheap, especially on DraftKings (eighth-most expensive RB on the main slate despite being the No. 1 RB in fantasy points per game). If the Bucs roll against the Eagles — and they are 8.5-point favorites — Fournette may be a big reason why. Philly ranks bottom-10 in fantasy points allowed to RBs, and Fournette himself dusted them for 128 total yards and 2 TDs on 28 touches back in Week 6.

Here’s a fact that should surprise nobody: Per the FTN WR/CB matchup tool, Cooper Kupp has the best individual WR-CB matchup of the slate.

The Cardinals have the 29th-ranked pass D, and they have allowed the fifth-most fantasy points to opposing WRs on the year. That includes Kupp going nuclear against this defense for 13 catches, 123 yards and 1 TD in Week 14. In fact, since Week 14, the Cardinals have just been dusted by WRs across the board. Here’s the list of WRs who have scored against Arizona just in the final five games of the season:

I’m not trying to gravitate toward the Bucs by having them take up three of the five spots, but that’s just where the matchups are pointing. Gronkowski had no games with at least 10 targets in Weeks 1-14. In Week 15, everything changed when Chris Godwin got hurt (and then Antonio Brown quit two weeks later). In his last four games, Gronkowski has seen 10 targets three times. He racks up the yards perhaps faster than any TE in the league (14.6 yards per reception - including at least 16.4 YPR in his last three games) and is always a threat to score multiple TDs. The Eagles have allowed the second-most fantasy points to TEs on the year, including a league-worst 6.3 receptions per game and a league-worst 0.8 TDs per game allowed to TEs.